A young man throws himself from a cliff in a wet dream. He was stop-motion kissing an old confidante/debutante prince in reverse. He takes the integral of the thought of taking his queerness into momentum. He is falling at the rate of 9.8 meters per second squared, rapidly accelerating into a little death. If he hits the ground and wakes up, a sweaty, semen-stained boy sitting upright into soft dark, at what force does his forehead impact the ceiling if his lofted bed is raised as far up as it can go, only ten inches space from his reeling dreams. Does it hurt?

A young man is being appraised by a young lady from behind. The young man can feel the gaze on his firm, near motionless right buttock. He would do the same to her. If she is three inches taller than he, and his ass is 34 inches from the ground, what is the angle in her sight line, and, is it possible that both parties feel guilty in the depravity of their relationship? Draw a diagram.

Take the derivative of the following situation: two male students wink at each other from across the room, one of which has a black eye, the other a sore conscience. What is the function of the wink; how can the ego receive a sucker-punch; how far does flirtation go until it makes a friendship awkward; and, what is the rate of change in how fast the young man walks away?

If a heart is pumping at 172 beats per minute, and the only two indications of this acceleration is vectored toward him in a horizontal plane – the indications that happen to be two lovers that are unaware of each other but aware of the young man – at what constant deceleration must the heart continue if the young man, guilty as a crater in the ground, has to cut ties with one lover? How long does this take? Remember to take into account the lovers are the opposite sex of each other.

What is the universal gravitation of two human souls falling in love if they are both floating in space – or due to the consumption of THC – and how do they return to the selves from which they came? Explain gravity to a seven year old boy who is discovering his body for the first time.

Find the percentage of fucks given if the young man tells his parents (consider them a unit) he is a bisectional vector pointing at a right angle. What has the larger percentage: concern or hatred?

The young man drives toward a city where a Pride event will be held at noon. It is exactly 10:47 am. The city is 47 miles away. At what speed must he drive to get there, and, what is a second measured by? Is it measured in relational experiences, the rate of decay of an element locked in a vault in London, the suffering and questions lived into with no expectance for an answer, or is it a construct that means nothing and only aging and growth is the example of passing time? Explain why each is either wrong or correct. Each response should be at least three sentences.

The young man wants to know the escape velocity of an atmosphere that has the following percentages of substances: 15% doubt, 65% self-deprecation, 12% half-assed confidence, 5% sexual frustration, and 3% his doubts about holiness. Each substance has a density that is measurable by a cubed function. The first substance has a density of 4.5 units of failed love. At what constant rate of acceleration must he exert to escape, and does it matter if his heart is oiled?

The young man has had sex with 14 partners. Three of them were women he loved. Four of them short term. Five of them of platonic benefit in nature. And two men. At what depth must he dig into himself to find the honest truth in who he actually loved? Design an equation to prove it.

The earth is traveling at approximately 67,000 m/h around the sun, and, at a particular spot on the earth’s equator, simultaneously spins on its axis at 1,040 m/h. There are 365 days in a normal year. Knowing the speed at which the earth travels, how long might it take for a queer young man to accept himself if considering speed as a function of calculable time? Does he succeed?

Consider yourself as an atom in the universe. Opposites normally attract. However, in most states of chaos and turmoil, fear and curiosity, love and apathy, the attraction may be homogenous. This is a three part true or false question:

A) the function of love is to serve the self.

B) love is a multiple-faceted, complex geometric idea where each human being behaves as a connectional point on this three dimensional object 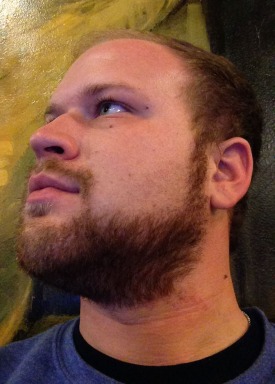 Samuel J Fox is a queer lyric essayist/poet living in rural North Carolina. He is full of pleasant darkness and guitar strings. He will blur your lines and uproot your social norms. He has poems and essays in (b)OINK, Maudlin House, and Muse/A Journal. He is forthcoming in Polychrome Ink Literary Journal.