You’re five the first time someone points out you’re different. They ask you, “Why do you talk like that?” You don’t understand what they mean. You speak English as coherently as a five-year-old can. That is, without knowledge of grammar and its rules. Sometimes, you slip into a drawl. You don’t, however, possess the accent of most inner-city Clevelanders.

In Fifth grade, you find out Oreo means Black on the outside and White on the inside. You now understand why this is an insult: it marks you as other-than-Black.

Seventh grade is the first time you’re called a White girl. You ask how that even makes sense. After all, you are hazelnut brown. You have brown, almost Black, eyes. You have curly, dark brown hair. You’re told you are White because you have a “Valley girl” voice. It still doesn’t make sense to you.

Your family starts calling you an Oreo.

You’re in Eighth grade and allowed to start painting your nails. One day, you paint them Black. Your mother and aunt tell you, “That’s what White girls do.”

You’re allowed to listen to music other than Christian and Gospel. You find that Rock is your favorite genre. You’re told, “Rock is for emo White kids.”

There’s a song by Owl City called “Fireflies.” You start singing the song in front of your sister. She says, “You’ll get beat up listening to that song in the hood.” You still don’t know whether she was serious or joking.

You and your cousin flip through magazines. You point out guys you think are cute. You point out a handsome White guy. Your cousin says, “Of course you’d choose him.” You are offended. Most of your picks are White. You choose an okay Black guy in defiance.

You start high school. You find that you are very attracted to a White guy. He has grey-blue eyes that make your heart sputter. You gush about him in the way fourteen-year-olds gush about crushes. You are asked if you have a crush on him. You blush. They ask if he’s White. You don’t answer. You think his race doesn’t matter since you aren’t allowed to date.

Your family has stopped calling you an Oreo. They stick to White girl.

You and your friends discuss each of your full names. You proudly say, “Jazmine Charne Dion Ellington.” One of your friends is a tiny White girl. She has pale skin and pale eyes and pale hair. She says you have a rich White girl name. She speaks with the accent of other inner-city Clevelanders.

You start college. You make friends with a group of African students. You become close to an Ethiopian girl. She tells you, in her country, you would be considered White. You are the same shade of brown as this Ethiopian girl.

People assume you are half White or were adopted by White parents. You find this extremely frustrating. You don’t think being half White or adopted are insulting things. You are insulted because their view of what it means to be Black is so rigid, they automatically categorize you as “other.”

Your roommate is a friend from high school. She is White with brown hair and hazel eyes. She is one of her mother’s two fully White children. She has a Black brother. She is proudly Irish. She speaks with the accent of most inner-city Clevelanders. She says “Nigga”, as if she is Black. You don’t even like when Black people use this word. You tell her this. You tell her this makes you uncomfortable. She lists all the reasons why she can use the word. The main reason: she’s “Blacker than you.” You are not heard. You don’t like to fight. You back down.

“Nigga” is supposed to be endearing. You realize it’s supposed to reclaim stolen power. You think it’s still derogatory.

“Nigger” is always an insult. Your mother and uncle use it when people do illegal or inconsiderate things. You think it’s relevant when people in your neighborhood block both sides of the road, when they drive recklessly, when they harm people or property. A “Nigger” can be anyone, from any race.

You are not allowed to use this insult because you “sound too White.” No, because you are considered not-Black.

You’ve been told your “Black Card has been revoked” too many times to count.

You get brown and blonde braids. Your mother says, “Your hair finally matches the rest of you.”

You go back to campus. Your roommate has fun with your new hair color. She makes blonde-White-girl jokes the whole time you wear blonde. You finally get annoyed and change your hair. The blonde jokes stop. The White girl jokes persist.

You visit your Mom’s job. She is a nurse. She introduces you to the doctor she works with. You tell her it’s nice to meet her and answer her questions about your schooling. Everyone in the waiting room goes silent. They stare at you. The doctor asks your mother, “Where’d you get this White girl?” You say speaking proper English doesn’t make you White. An older lady in the waiting room agrees with you. You remain uncomfortable.

You’ve wanted to be a doctor for a while. People get excited for another “Black doctor.” You wonder how being Black and wanting to be a doctor correlate. You want to point out you “don’t count as Black.” You smile and remain silent.

You are now an English major. You are excited for workshops. You have three literature classes even though you’re Creative Writing track. Because electives.  You look forward to Tuesday and Thursday. They are your reprieve.

The first day of class, you are glad to see so many familiar faces. Glad and nervous because they have seen your writing. You think reading someone else’s consciousness is such an intimate thing. It’s like holding their brain in your hands. Caressing every neuron that makes them, them. Your brains become one as you absorb their words. These thoughts are the only cause of your anxiety.

You are told pick up the little White book hiding behind a Black hood. The book that is poetic Nonfiction. You are told to read the first four parts. Fifty-five pages. You internally groan because you are sick of looking at words on pages. But you pick up the book. And you read. And at least it’s not Chaucer. Then you realize the book is about racism. Suddenly old English doesn’t sound nauseating.

You are terrified because you can’t seem to write something not personal. You hate feeling vulnerable. You realize to write is to be vulnerable. You still think it sucks. You think it’s mortifying. And you think you don’t want people to know the weakest part of you. While you lament your fear of exposure you never register that you are the only Black person in this workshop. Not until the topic is racism.

Rankine disperses racial art throughout Citizen. Artist Glenn Ligon uses Zora Neale Hurston’s quote, “I feel most colored when I am thrown against a sharp white background.” You find it uncanny how this quote fits your current situation.

You go to class even though you really don’t want to. You sit there hyperaware of your dark skin and dark eyes and dark person hair. You can’t bring yourself to look at the bodies so different from yours. A scalar semicircle of White. You listen to them speak and you are terrified. You fear they will look to you for guidance on this nasty subject.

You can’t help but panic when the professor asks for your thoughts on citizenship. Your eyes widen. Your throat seizes. You rapidly shake your head no. She does not call on you because you are Black. She calls on you because there is a lull in conversation.

You have two classes with this White guy. He calls you by the name of another Black girl, multiple times. The two of you look nothing alike. You are clumsy and large. She is dainty. You think it can’t be the braids. You wear yours like a mane. She wears hers in a blue and Black Bob. You think maybe it’s the awkward silence the two of you inhabit. Whatever it is, you enjoy watching him squirm when Rankine objects to being called another Black girl’s name.

You think you’ve never seriously dealt with racism. You can’t say you’ve been rejected by White people because of your skin. You can say that you’ve been rejected by Black people because of your skin. That is, the fact they think your skin and personality don’t match up. You speak proper English and you annunciate and you care about grammar. You like pumpkin spice and you like leggings with oversized tops and you like country music. The later could just be because it connects you to the part of the country in which you were born, but didn’t grow up. You hate most rap and hip hop music. You don’t like the clothing trends that are so popular amongst people of your race. And you don’t understand half of what they say because you don’t keep up with slang. Like why is “run the fade” even a thing?

You have been told by White people that you are basically White. That you don’t count as a Black person. You’ve been called an Oreo and a White girl by people of your race too many times to count. They eventually ditched Oreo and stuck with White girl. As if calling you Black on the outside is too much acknowledgment of the part of you they deny. You no longer feel rage spark in your chest at the sound of this insult. You barely muster mild irritation. You’re still not sure if that’s a good or bad thing. Maybe it’s gray like the place in society where you exist.

As your cousin says, “You fit in with the White people.” You have been told many times, “your lips are small and even your ass is White.” Which is incredibly stupid to you because Black people don’t have a monopoly on full lips and large butts. But you voice your discomfort about workshop to a classmate. And she really can’t fathom why you aren’t comfortable being the only Black person in a class where the topic is racism. You can’t help but wonder if your class thinks of you as White. In that moment, you understand why people say race is a social construct.

You rally every ounce of courage you possess. You decide to speak with your professor. You beeline to the place you know she’ll be. Before you can change your mind. You apologize for being weird which is absurd. Because who wouldn’t feel weird? You forget that you’re very good at hiding inside yourself. You are heard. You can’t help but feel a little powerful, after you two talk. In this powerless situation, you do something you normally don’t do. You say you are uncomfortable.

Your professor asks, “If you think about it, aren’t your experiences the result of racism?”

You reevaluate the way you think about race. 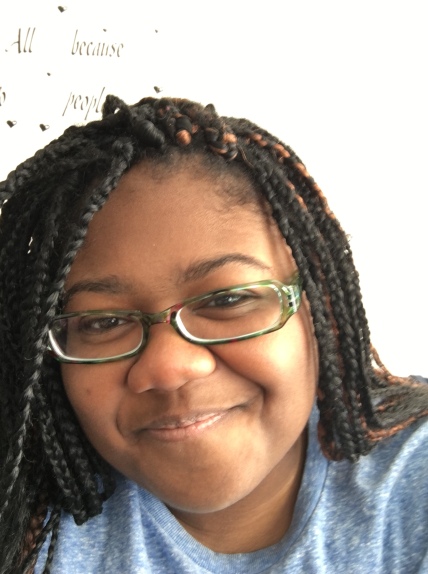 Jazmine Ellington is a graduate student in the NEOMFA out of Cleveland State University. When she isn’t stringing words together, she’s cuddling with some manner of animal. Her work can be found around the interwebs.