Running in the Dark

Anymore I wake before sunrise, drink coffee and and eat a banana. Then I stretch and strap on a headlamp and trot down the paved running trails heading out of my neighborhood. After injuring my leg this last year, I am mindful to keep my gait even. I count to three over and over again—making sure the ones and threes fall on alternate feet. One, two three, left. One, two, three, right. I pass a lone streetlamp and turn into the woods where the paved running trail unfurls for three miles without a single light—trees and field on either side.

On moonless nights, as I make that turn, an unending black surrounds me. Three miles later I pass a power relay station and it hums in the darkness, the skeleton frames of the towers lit at the base and glowing yellow behind a ten-foot chain link fence topped with barbed wire. My shadow stretches lank in the low light, its elongated form flickering against the trunks of trees. When I pass, I’m back into the darkness with only my headlamp in front of me. My eyes take a few seconds to adjust, the traces of light still imprinted in my vision.

Running with a headlamp illuminates a small circle in front of me and blinds the periphery. On foggier mornings, for mile after mile, I step into the light only to have it pulled out from under me. The only indication of the world around me comes from the noises I hear. My vision is limited to one or two steps ahead, the occasional reflective object. When I hear a thrashing in the woods, I figure it to be a deer; a swish of the brush and it must be a rabbit. When I turn my head to look, sets of golden eyes stare back at me.

The sounds of the trail used to scare me. The snap of a branch from a scrambling possum would cause the nape of my neck to crawl and the top of my scalp to pull tight. My pace would quicken and my breaths heaved in and out until the adrenaline passed and my gait returned to normal—one, two, three—and I realized the noise was nothing more than the passing of a likewise startled woodland creature. Now I run without regard for the sounds around me, the scuff of hooves on the pavement behind me, the patter of raccoon paws in the wet grass, the chuffing of a skunk as she watches me pass. Overhead birds flutter from their perches; bats flap their frenetic dance and disappear. Then, for long stretches, it is quiet.

And because I am alone out here, because I rarely see another human, and because I know she won’t listen no matter where I am, I talk to Kylie. It’s just as hard as ever and the  conversations I have with her spiral in and out of consciousness, some of the words said only in my head, others out loud. I play the game of chess by myself, stepping in and out of the light; I say a few words and imagine her response, the way she will avoid looking at me, how she’ll shrug and say I guess to whatever question I ask.

I redouble my pace and the headlamp bounces up and down until it looks like the tree limbs stretched over the trail swat at me, the birds and bats shaken from their perches. It’s an optical illusion, I know, and I close my eyes. Out here, in the stretch of trail beyond the power relay station, the difference between light and dark, wakefulness and slumber, vision and confabulation is naught. I let the pavement beat against the balls of my feet, one, two, three, one, two, three, alternating the ones and threes. Because if I run fast enough, hard enough, the world inside my head fades away for a while and then it’s just me and the other strange creatures in the darkness, whatever voices fill the void, be they my own or the ones I imagine.

Kylie lived in her bedroom during senior year of high school, rarely coming downstairs to eat or talk. When she did join us for dinner, she poked the food with her fork, wrinkling her upper lip before asking if she could make a sandwich instead.

My wife shook her head. “We didn’t put money on your school account because we bought groceries for you to pack.”

Kylie shoved the plate to the center of the table and went back to her room, taking the stairs two at a time. The other kids watched and I tried futilely to redress her, yelling that if she was hungry later she needed to eat leftovers, not come downstairs and make peanut butter and jelly at midnight. But in the morning, before I left on my run, I would find the open bag of bread, smears of jelly on the counter, the refrigerator door ajar, the open container of peanut butter on its side.

Now, when I come downstairs, the kitchen is clean. Kylie has moved out, to Virginia, to live with her real dad.

Sometimes, when the night is bright enough, when the moon hangs full and fat and heavy and white in the sky, I turn my headlamp off. If there’s a frost, the trees and trail, the stubble-cropped corn fields and far-off farmhouses glitter with silver dust. I can see just as far now as during the day. My breath comes out as one thin feather of fog after another. Above me the stars sprawl out in a great kaleidoscope of pin pricks in the canvas of shadow. And meteors, those long-tailed flits of light, streak silently across the dome above. The world this time of day, the hours right before dawn, is filled with seldom-seen beauty.

I want to tell Kylie about it. I want her to see it for herself, know what it is to look up at the sky and run in the darkness so it feels like you’re endlessly falling up, like the planet is leaving you behind and the sets of yellow eyes peering from the shadowed spaces watch as you tumble upward, silhouetted by the moon, wrapped in nebulas of your own breath, flecks of frost swirling about you like a hundred thousand shooting stars until you’re cast out into the deepest wells of outer space and your legs kick against nothing and your lungs have nothing left to breathe. Until there is nothing and everything is nothing. This is what the huge, dark world looks like when you’re by yourself.

But by the time I come back down, return home, after I stretch under the yellow incandescence of our porch lamp, the feeling has passed. The first traces of a horizon come into definition with the dull rays of sunrise. Besides, Kylie doesn’t live here anymore and she never will again. She said as much in the way of goodbye when she left and our exchanges have been shorter than ever since then. The other two kids have shifted rooms and the youngest one now sleeps where Kylie slept.

Despite having an alarm clock, Kylie never woke up on time. On weekends she might sleep until mid-afternoon. Then, in a lapse of parenting, I would enter her room, stepping over mounds of clothes and stand by her bed.

Kylie groaned and rolled over.

“I don’t have to do anything today.”

“You need to clean your room.”

“I cleaned it last night.”

“I’m standing on a pile of dirty laundry. You didn’t clean your room.”

Blood coursed through the temples of my head and I tried to keep my voice even. “It’s two p.m. You’re done sleeping in.”

“God, could you just leave me alone?”

I knew she was moving out in a couple of months. She had finalized the plans with her dad and I shrugged. As I left the room, before I pulled the door shut behind me, I said, “People whose lives go somewhere get out of bed in the morning.”

Now, after a long run, I head up to what used to be Kylie’s room. The youngest one sleeps there now and when she rouses, she stretches before opening her eyes. I’ve learned to ask her questions. When she wakes, her mind is foggy and conversation wrests her from hypnopomp to wakefulness. She eyes me suspiciously and asks if I’m sweaty from my run. I am and I tell her so. She says she’ll wait until after I’m showered and clean to give me a hug. My son is also awake, downstairs packing his lunch, and I tell him about the deer I saw, how a goose flew across the footbridge spanning the river and I could feel the beat of its wings as it passed. He smirks and says, “Cool story, bro.” Then he brags about how fast he ran at track practice yesterday, how young he is compared to me. I was your age once too, I want to tell him.

I want to tell him how fast and confident I used to be when, like him, I ran high school track—how after our events we feasted on peanut butter and jelly sandwiches made by one of the athlete’s moms, how the stadium lights blared off the empty aluminum bleacher seats, only a smattering of parents left to watch the final events, how, surrounded by the lights, we cast no shadows of our own and the night was beyond us. Meanwhile the last of the runners—the two-milers—ran lap after lap, caught in orbit around the field where the throwers hefted hammers and lunked shot puts into sand pits. Eventually, the stadium lights would go out, the filaments orange and twisted like phosphene visions in the sudden black. One by one, we spun off into the outer darkness, running and stumbling, some of us propelled along like somnambulists without direction. We had been blinded by seeing and it would take years before my eyes adjusted to the darkness and I found my footing.

But I say nothing to my son; he knows my thoughts. He watched me fail as a parent to Kylie and knows these are the words I should have said to her. And these are words she will likely never hear, unless someday we happen to cross paths somewhere out there, in the darkness. 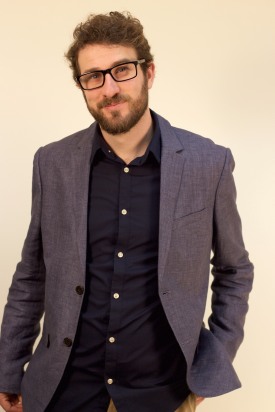 Ryan Ireland, PhD, is the author of two novels published by Oneworld, Beyond the Horizon and Ghosts of the Desert. He has also published scholarly, popular, and creative nonfiction in Public Libraries Quarterly, Voices of Youth Advocates, and Ripcord. Earlier this year, he was a finalist for the VanderMey Nonfiction Prize and the winner of the Tom Howard / John H. Reid Essay award. Currently Ryan co-chairs a nonprofit, Third Story Literacy Project, with his wife, Amber. In 2019 he will be a writer-in-residence for the Jan Michalski Foundation, located in Switzerland.