I was 14 and nearly a confirmed Lutheran. I’d attended the classes, learned the Lord’s Prayer and Apostle’s Creed, and done my acolyte duties. Only one requirement remained: I had to spend a week at a Lutheran camp in Western Pennsylvania. I wasn’t thrilled about going, but I didn’t object to it, either. I was a Boy Scout, after all. I loved the woods, campfires, and making stuff out of leather.

Unfortunately, Lutheran Camp wasn’t Boy Scout Camp. Instead of slopping in creeks, I’d be wading through Luther’s Small Catechism. Instead of catching fish, I’d be going to Bible Study. Lutheran Camp did, however, have one thing the Boy Scouts couldn’t offer: girls.

“There’s a whole camp of ‘em,” some hormonal scout would rave. “Go through the woods all the way to Devil’s Rump. Then take a left at Caligula’s Oak. Go up through Godiva’s Hollow and you’re there. Camp Amazon, they call it. Nothing but girls, swimming naked!”

One year, there was talk of a Girl Scout camp on the other side of a big lake. My tentmate and I snuck off in a canoe around dusk. We paddled for miles, battling swarms of mosquitoes, only to be met at the dock by an irate Troop Leader wielding a tennis racquet. As we leaped back into the canoe my friend yelled: “I saw one over by the boathouse! I saw a girl!”

Spotting girls was not difficult at Lutheran Camp. They were everywhere: playing volleyball, splashing in pools, braiding each other’s hair. You couldn’t walk to the dining hall without tripping over one. The problem was finding something fun to do with them.

I was escorting a girl back from the campfire one night.

“So what should we do now?” she said.

“At Boy Scout Camp we used to kidnap guys from the other troops, hogtie ‘em, and leave ‘em behind the latrine,” I said.

My cabinmates, a bunch of jocks, were no help. They saw girls as intruders in their manly realm. “Co-ed soccer,” they’d scoff. “Flag football. They’ll have us wearing panties by the time we get out of here.” When they noticed me colluding with the enemy, I became “Dan, Dan the Ladies’ Man.”

Of course, I was no such thing. Until I had a breakthrough at the weenie roast, that is. I was standing around with three or four girls, eating burnt hot dogs and drinking bug juice.

“Hey,” I said. “Do you guys remember the campfire song from Meatballs?”

“C’mon, it goes like this: ‘We are the CITs so pity us. The kids are brats the food is hideous—’”

“Counselor in Training,” I said.

“I remember that song,” said a blonde girl. “We’re gonna smoke and drink and fool around…”

“We are the North Star CITs!” finished the girl.

Everyone giggled. The other campers joined us and we sang:

We are the CITs so pity us,

The kids are brats the food is hideous.

We’re gonna smoke and drink and fool around,

“Come over behind the tree, and I’ll show you,” I said.

But it was too late. The song had already started again, twice as loud. Soon, a bearded counselor was rushing over. “Stop!” he shouted. “That song is inappropriate!”

From then on, all I had to do to impress girls was get a rousing rendition of the CIT song going.

My cabinmates were not happy about my newfound popularity, and hit me with a constant barrage of “Dan, Dan the Ladies’ Man.” After days of abuse, I finally worked up the courage to fire back. “What do you slobs know about ladies?” I said. “You couldn’t get it in a geisha house.”

This was something I’d heard in a World War II movie. I didn’t even know what a geisha house was. The head jock, a football player with a Cro-Magnon brow, didn’t either. But he knew an insult when he heard one. He pointed a fat finger at me and said, “You’re dead, Ladies’ Man.”

Luckily, he would never get an opportunity to exact his revenge. Unbeknownst to him, I was leaving camp in the morning (a day early) to join my family’s road trip to the coast.

At dawn, I packed my gear and crept out of the cabin with the counselor.

“So where you headed?” he said, as my dad pulled up in his Coupe de Ville.

“Well, take care. And good luck with the ladies.” 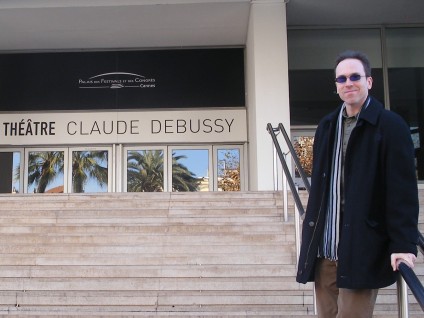 Dan Morey is a freelance writer in Pennsylvania. He’s worked as a book critic, nightlife columnist, travel correspondent and outdoor journalist. His writing has appeared in Hobart, Harpur Palate, McSweeney’s Quarterly, decomP and others. He was recently nominated for a Pushcart Prize. Find him at danmorey.weebly.com.