I bought salt enough to bring the ocean
back from simple water, I bought artichokes
tight as a heart — I earned a bonus, leapt
through the neighborhood eating coins, pretzels,
the odd orange,
I purchased a set of scales,
not cerulean, cerulean having no place in the poem,
but a color so monied you can only name it by sight —
try and stop me if you’ve heard this but there are jewels
so precious you can only steal them, and
this is the way I came
into a rhinestone and gold charm
hot from the hand of a young crush, can you believe
we’ve allowed the creation of a black so endless
you have to pay to look into it? Can you believe a fruit cocktail
contains one cherry per can? I’ve learned so much
from the finance department—

CLASSICAL POEM : COME OVER & WE WILL SING ALL NITE

For the great secret thing
to pass between us, open your mouth.
In plain sight  it passes again, as you
and I,       and you watch. To the satellites
we remain distant markings on the bank
of a river.            Come over, and we will sing
all nite—! Come over, and  I will show you flexibility
of technique: All my love               has ever been
is carrying          the same full glass of water
through a shapeless and intruding   void,
arms raised in commitment to form.
You        are mostly asleep, now.
I am mostly awake,            secondhand
smoking, which is shockingly more
intimate than you   mostly
sleeping   to the ways    I contemplate,
I count the ways. 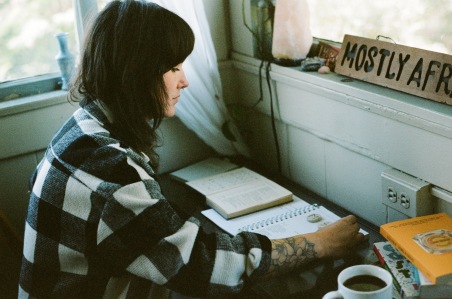 Caroline O’Connor Thomas is a poet who sleeps & writes in Oakland. Her poems have appeared in several publications, including Tin House, Sixth Finch, Vinyl, Salt Hill, & others. Her first chapbook Unusual Light Source is available from White Stag Publishing.