“As the black hole blinks out of existence, so does the universe’s record of everything that went inside. This violates a principle called “unitarity,” the backbone of quantum theory, which holds that as particles interact, information about them is never lost, only scrambled, so that if you reversed the arrow of time in the universe’s quantum evolution, you’d see things unscramble into an exact re-creation of the past.” -Natalie Wolchover

we were royalty, but kind—

we listened to the bumblebees
as they bobbled on the breeze
full of purpose:

we left them the daisies &
the tiger lilies, the hyacinths
& the sunflowers

& collected ourselves inside
baskets of each other instead

with colored pencil planets like vertigo
& verbs, we had all we needed
to create a world

we exchanged our fears for stardust
so that our bones might feel more at
home, here

you: a fixed point in the solar system
& me: a shuttle on a mission

we were astronauts, but grounded—

collected itself on our arms & fingertips
& pulled itself up over our heads,
like halos only we could see,

like escapism but for real, like we could
scuba dive without oxygen tanks
& no one asked us to explain

we were illusionists, but honest—

& it was the summer when
we rode our bikes to the lake
more times than we could count,

again all on her own

all i’m saying is that, sometimes,
you’ve got to be careful about
the things

you decide to hold on to.

to build a home from pebbles, or they sang to each other until they had learned each other’s voices

tell me, again / so that you might break the tides of my tongue
& make oceans of my cupped

piano keys & your shoulder peeking / out from
beneath cosmic timing & teeth

your t-shirt: a galaxy

i can grab with both hands / so tell me, again
how the moon looks over her shoulder

make a garden of all this—

you’ll make rubble of me yet.

*The line “they sang to each other until they had learned each other’s voices” in the title “to build a home from pebbles, or…” is taken directly from the New York Times article: “The Gay Penguins of Australia,” written by Nellie Bowles. 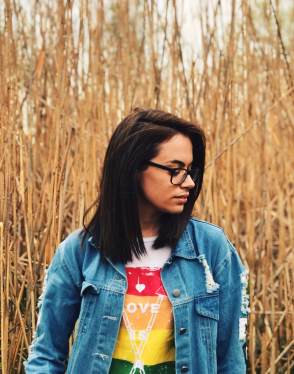 An avid introvert and full-time carbon-based life-form, Ashley Cline crash landed in south Jersey twenty-eight years ago and still calls that strange land home. Most often found listening to Carly Rae Jepsen, her essays on music and feelings have been published by Sound Bites Media; her poetry has appeared in 404 Ink, Third Point Press and Francis House. She graduated from Rowan University in 2013 with a Bachelor’s degree in Journalism, and her best at all-you-can-eat sushi is 5 rolls in 11 minutes. Twitter: @the_Cline.