I made you a playlist. Let’s sync the start
and listen to the same songs in the same order

and feel the same thing at the same time
just once. Or have we evolved past

shared experience? Is there no such thing
as universal? I hope this letter to you is
translated; otherwise I’m that asshole
who expects everyone to speak English.

Dear Everyone, I’m not that asshole,
which is not to say I’m not another one.

the moon lays down on the water.
It translates to moon-street, moon-road.

In Finnish it’s kuunsilta, moon’s bridge.
At least we have that silver light in common.

And the stars—they must have their own
words for things, and by words I mean

pulses. Whatever song is playing now,
please turn it up. Dear Everyone,

if you’re reading this in a language
you can understand, you must be

wondering who exactly I’m addressing,
wondering if I mean you. I do.

Funny, what swims up in the mind:
sample lipsticks, thimble-sized,
the Avon lady across the street
handed to my mother at the door.
Pinks, reds, corals. When we lived
in that house on Lilacwood, I remember
visiting my aunt and uncle in the country.
They had cherry trees. I can see myself
under them, looking up into the branches.
This is a thing that happened.
My grandfather lived in Granville
back then, with his new wife—
and didn’t they have horses?—
while my grandmother rented
a small apartment in the city
near the mall where she worked.
All these pieces, what do they add up to?
Tiny lipsticks, cherry trees, talk
of horses I don’t think I ever saw
at the house my grandfather bought
for his third wife, the one who seemed
so dazed, we called her The Spun Pheasant
for what men did to birds before
they threw them into the air and shot.
Later she took my grandfather
for nearly everything. Later
my grandmother lost almost everything
in her mind, but a few memories
swam up now and then to wake her—
and a few names, even if they weren’t yours.
All these pieces, what do they mean?
If this were a mystery, we’d consider
memories clues. But isn’t this a mystery?

There is a revision of me that lives
in the future, watching me from the future,

which makes me a prototype,
an earlier version, the one she thinks of now.

as the old house, and at my children—
her children—still lap-small

and sticky-cheeked. She watches us
the way I watch old, time-stamped versions

of myself, the roughest drafts, feeling
I’d slit a stranger’s throat for the clean slate

that was mine—the slate I wanted
only to write and write on.

She watches from the future
to remind me I am not finished,

not as fleshed out as I feel.
I must be full of blanks she’ll know

how to fill, and she’ll fill them.
She looks back at me, and someone

looks back at her, and I am watching
every version of myself behind me:

never overridden or replaced
but saved, each of us saved. 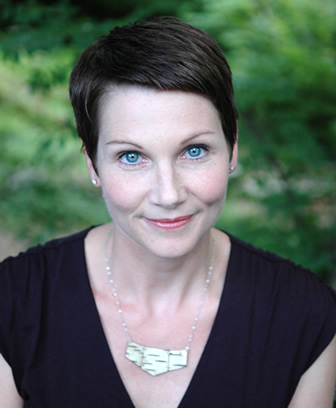 Maggie Smith is the author of three books of poetry: Good Bones (Tupelo Press, 2017); The Well Speaks of Its Own Poison (Tupelo Press, 2015); and Lamp of the Body (Red Hen Press, 2005). Smith is also the author of three prizewinning chapbooks. Her poems appear in Best American Poetry, the New York Times, Tin House, The Paris Review, Ploughshares, The Gettysburg Review, Guernica, Plume, AGNI, Virginia Quarterly Review, and elsewhere. In 2016 her poem “Good Bones” went viral internationally and has been translated into nearly a dozen languages. PRI (Public Radio International) called it “the official poem of 2016.”

Smith has received fellowships from the National Endowment for the Arts, the Ohio Arts Council, and the Sustainable Arts Foundation, among others. She lives in Bexley, Ohio, and is a freelance writer and editor.